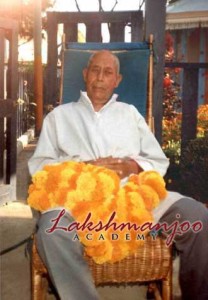 The festival of Maha Shivaratri, the ‘Night of Shiva’, is celebrated throughout India and the world by sincere devotees of Shiva.

We will privately celebrate Maha Shivaratri a day earlier than the Vedic calendar, according to Kashmir Shaiva philosophy. Swamiji suggested spending the night meditating as long as one wishes, followed by a light meal before retiring for bed.

Wishing you a Happy Maha Shivaratri!

“Śiva rātrī means that night where you are graced with the śaktipāta [grace] of Lord Śiva. In that night he bestows śaktipāta, tīvra-tīvra śaktipāta [intense grace] is bestowed to the one who deserves.” ~Swami Lakshmanjoo

In this video excerpt, Swami Lakshmanjoo reveals the real meaning of Śiva rātrī, the dark night of Shiva . . . but first, he explains another very beautiful verse about the greatness of Lord Śiva.

. . . mahātmanām, the rahasyā, the secret of Shaivism – at the beginning of Kālī Yuga – pūrvam āsana mahātmanāṁ, ṛṣīnāṁ vaktra kuhare,1 the secret of Shaivism was residing in their heart. Teṣv eva ānugraha, they would explain it without writing [it down]. They didn’t write [down] the theory of Shaivism at all; it was in their brain. They would explain it, bas, and it would penetrate those to whom it was explained. And they were the same, i.e., they became the same.

And there is another śloka of how great is Lord Śiva:

. . . dhyāyet, you should concentrate on that – Maheśaṁ – [the one] who is the Lord of Lords. Lord of Lords is Maheśaṁ. And he is rajata-giri-nibam, he is so big, you can’t imagine how big he is. His body is so big he is just like the mountain, a big mountain of silver, white silver. The big mountain of white silver, it is his body. From kalāgnirudra to śāntātītā kalā,3 he is so big! What can ordinary people do before him? – They are nothing!

So he has accepted this whole universe as his own crown. So it is not separated from his Being.

It is sparkling all-round.

Ratnā kalpa-ujjvalāngaṁ, all ratnās, all jewelry is shining, is producing from that, i.e. from that body (of Lord Śiva).

Ratnā kalpo-jjvalāngaṁ paraśu mṛga varābhīti hastaṁ, in hand he has got paraśu; paraśu means hatchet (axe). Hatchet is for those who are sinners, cut them into two. Finish them altogether – paraśu.

Mṛga is that deer. Deer is very beautiful . . .

SWAMIJI: . . . just like Sītā. Because Sītā was tempted, and this temptation was just a trial in which she didn’t succeed. She was tempted.

So, temptation should not be accepted.

In Yoga Darśaṇa5 also it is said:

So, this is a test for him. From that test, he must come out.

DENISE: What kind of things do the gods and the goddesses offer that person?

SWAMIJI: They offer, “This is a beautiful plane, it needs no petrol, you can fly to anywhere in this world. You have obtained it by your samādhi!”

You should not accept it!

I can go by thought only! Why should I accept this . . . this kind of machinery!

Pūrṇar-anịṣta-prasaṅgat, he will fall again in this world.

He has got three eyes, one is objective, one is subjective and one is cognitive. This whole cognitive world, this whole objective world and this whole subjective world are his three eyes, they are not separated from each other. Object, subject and cognition are the same. Lord Śiva is residing equally in these. Object is not inferior, and subjective consciousness is not superior, they are in the same level, in that supreme God consciousness where I reside.

What have I explained?

DENISE: Objective, subjective and cognitive are the same.

How great is he! What can these demons do before him?

And this is the definition of Lord Śiva’s form, which is formless.8

JOHN: So, what is the meaning of Śiva rātri?

JOHN: What is the importance of that in terms of Lord Śiva?

And in other words, it is Śiva rātri. Śiva rātri means that night where you are graced with the śaktipāta of Lord Śiva. In that night he bestows śaktipāta, tīvra-tīvra śaktipāta9 is bestowed to the one who deserves.

2.  In this recitation, Swamiji recites vandhyam (to salute reverently) in place of bījam.

3.  Kalāgnirudra bhuvana is the lowest of the 118 worlds, and the highest is the abode of śāntātītā kalā.

4.  Lord Śiva is commonly depicted with the crescent moon on his forehead.

5. This quote is from the Vibhūti Pāda of Patañjali’s Yoga Sutras.

8.  In his presentation, Swamiji did not translate the last line of this verse. The classical sense of the last line is: I pay reverence (vandhyam) to Him who has five faces (pañca vaktram) and three eyes (trīnetram), and who existed before the universe was created (viśvādyam), and who vanquishes all fears and agonies (nikhil-abhaya-haram).

9.  Tīvra-tīvra śaktipāta is the most intense form of grace. See Kashmir Shaivism, The Secret Supreme, Chapter 10.66.

(source: Video Archive of the Lakshmanjooacademy, by Swami Lakshmanjoo)
All Content is subject to Copyright © John Hughes.

You can add the public calendar of events for the Universal Shaiva Fellowship and the Lakshmanjoo Academy to your calendar with this link:
You can copy and paste this into any calendar product that supports the iCal format.
https://calendar.google.com/calendar/ical/usf.office%40gmail.com/public/basic.ics

Light on Tantra in Kashmir Shaivism - Abhinavgupta's Tantraloka Volume 2 Chapters Two & Three. Learn more...
__________
We are an IRS recognized 501(c)(3) charitable, nonprofit organization and your donations are fully tax-deductible (for US citizens).
Thank you!